→ I spent the week prior to this event working with the technical manager and preparing the equipment. We began by speaking to all relevant people to form a kit list of all equipment they required. We then combined this with a list of everything we needed.

→ We spent a day collecting all of the necessary equipment and transporting it down to the venue – a large tent.

→ We setup a PA with 4 main speakers and used 6 smaller speakers spaced around the perimeter of the tent. We used SM58s and SM57s to mic a live band which we monitored using a Behringer X32.

→ We rented in two large LED displays to show a feed from 3 wired stationary cameras around the tent. We used a Roland vision mixer to fade between camera inputs.

The week of experience was incredibly useful and helpful! It showed me the planning and work which goes into putting on such an event. 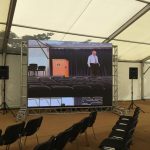 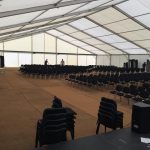 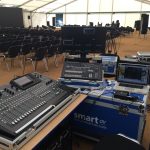 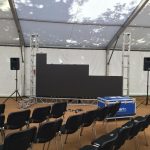